A man and his hats. 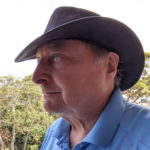 I love my hat. I have owned an Aussie Chiller hat for a long time. I bought my first one was when I came to my niece Heather”s wedding in Australia many moons ago. It was a grey thing wide brim thing, which I still have, that I use mainly when sailing since it’s soak-able, crushable and virtually indestructible. I bought my second one in California 8 years ago. I wear it mainly for golf and when I’m travelling. It too is soak-able, crushable and virtually indestructible. Why soak-able, you ask? On a hot day, you soak your hat and it cools your head as the water evaporates. I also ages well, gaining a lot of character with time and usage.

I have tried several times to purchase a new pearl-white Aussie Chiller online, since I could not find a retailer in Vernon. I ordered a L and each time received an XL. I even asked a friend who was in California to bring one back for me. He brought me back an XL. I was getting to think the world thought I had a swelled head☹

Now that I’m back in Australia, I searched hi and low for a retailer in Sydney. No one seems to have heard of an Aussie Chiller hat. I finally tracked down the manufacturer. After a few email exchanges I learned that they export most of their productions and don’t have any retailers in Sydney. But they were willing to mail me one. When we got back from New Zealand,  I arranged to get three: a black, pearl white and a grey. 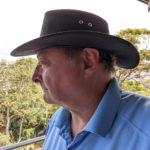 Rather than taking a credit card, they wanted me to deposit the money directly into into their account ( an Aussie version of an eTransfer). Fortunately, I was visiting my sister on the weekend and my brother in law, Murray, kindly transferred the money from his account for me. The hats were shipped on Monday and arrived at my door this morning just in time as we are leaving on a longish road trip this afternoon.

I’m not sure when I will retire my current black hat, it is getting a bot frazzled around the edges but it fits me like a well worn glove. The new one looks too new 🙂