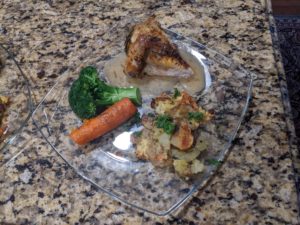 Last night I was roasting a chicken (recipe below)  and was wondering what to pair it with. I’m not particularly fond of mashed potatoes or anything mashed for that matter. I prefer something with a bit more texture.

I had some baby potatoes so I decided to make Smashed Potatoes. That might not sound like an exciting culinary delight, but it does liven up a meal, and roast chicken reminds me of the Sundays of my youth where inevitably my mother would roast a chicken and bake chocolate mocha cake.