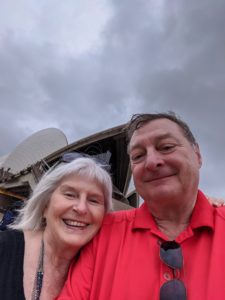 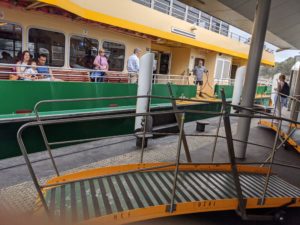 Catching the Ferry at Balmain East 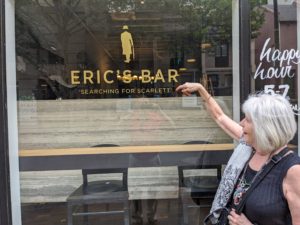 Simonne!
Who is Scarlett?
Why is Eric Looking for Her? 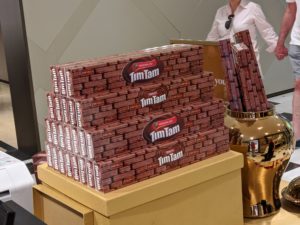 Barb & Pete
Aussies love their Tim Tam just like you! 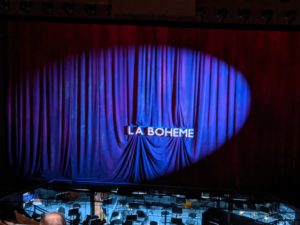 A Night at the Opera
Sans the three stooges.

Pauline let her mind wonder
and
Sees Monsters in the Rafters

January 6th was apparently the coldest day on record in the month of January for Sydney. I’m not saying that, being Canadians, we brought the chill to Sydney, it’s most likely just a coincidence. It also rained. Hum… maybe Guy’s rain-dance does work as he claimed; more likely a bit Furfey(1). Anyway, rain and all it was a lovely day.

Pauline joined Billie Jean for coffee with friends in the morning, while Guy wrote and posted his rant on the Usurious Mobile Rates charged by Canadian Telcos. He got a response back from the CCTS ( Commission for Complaints for Telecom-television Services): “Unfortunately, this matter is not an eligible complaint within the meaning of our Procedural Code and is therefore not within the scope or mandate of the CCTS.” Apparently, Telcos hosing(1)  Canadians is a matter outside their scope. Let’s see what our MP, Minister Responsible and Prime Minister have to say.

Strange but true, upon her return to the flat, Pauline received an email from, our house swapping buddy, Suzie who is in Vernon, saying that someone had found her Silley Hat(3)  and it was being kept for her at the Spa. The hat did contain Pauline’s name in the not-so-secret compartment, but how anybody knew to reach Suzie is still a mystery. Pauline was delighted, Guy was puzzled. Why would they go to a Spa for coffee?

After a leisurely early afternoon, we boarded the ferry from Balmain East (a 4-minute walk away) To Circular Quay. Incidentally, one of Pauline’s lunch companions suggested that we get the Trip View app which helps you navigate public transport. Guy did, so we left the flat 6 minutes before ferry arrived. Perfect! We planned to get there a few hours before the Opera, so we could get our 10,000 steps in touring the shops on the Rock. After some delicious Sushi, we headed for the Opera house for a pre-performance glass of Prosecco.The Production of La Boheme was Ripper(4).  Thanks to Trip View and the Ferry Service the return trip a piece of piss. (5)